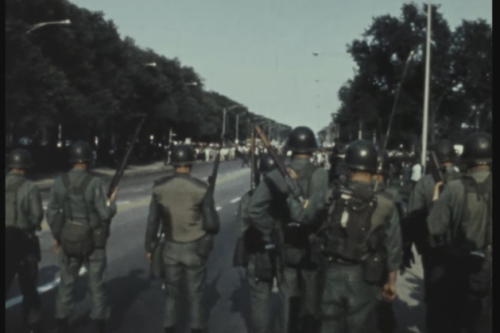 My most vivid memory of the 1986 Democratic National Convention is a tank, rolling down Michigan Avenue. And, besides the overwhelming number of police and soldiers — medics with Red Cross armbands. Those memories, even more than the tear gas and the terror, stay with me still.

We filled the streets and parks with protest and they responded with gas and guns and clubs. Police attacked protesters. And reporters. And Democratic National Convention delegates. Chicago Mayor Daley famously proclaimed, “The policeman isn’t there to create disorder, the policeman is there to preserve disorder!” Well, yes. They did that well.

This week, with another national political convention in full swing, I am taking time to reflect on some inspiring moments from three conventions of the past: 1948, 1964 and 1968.

We had worked to defeat LBJ, whom we knew as the war president. And in March, he said he would not run again.

We expected that Humphrey, his vice president and the anointed Democratic candidate, would continue his policies, and the war. The war in Vietnam was criminal. We could not support a candidate who would continue it.

By the time of the convention, many of us felt we had already lost everything. Martin Luther King had been assassinated in April. Bobby Kennedy in June. Going into the convention, Humphrey had the delegates and peace candidate Eugene McCarthy didn’t. We knew that.

“The streets belong to the people,” we chanted, even as the cops and tanks and tear gas took control of those streets. Sometimes you have to put your body in the way of the machine, even though you know it will roll right over you.

I wasn’t old enough to vote then, but I would have voted for Hubert Humphrey even while protesting against him. I did not and do not see that as inconsistent.

Humphrey represented not only a continuation of LBJ’s war policies, but also a continuation of LBJ’s domestic record: the 1964 Civil Rights Act, the 1965 Voting Rights Act, the War on Poverty, Head Start, Medicare, Food Stamps, immigration reform, environmental and consumer protection, and more. Nixon was a despicable man, and no peace candidate. George Wallace, the third candidate, was a racist demagogue.

Voting is a forced choice at one moment in time. Work for justice, which includes protest and every other means we can devise of changing society and public policies, is a long-time, day in and day out commitment.

I voted for Bernie in the precinct caucus, but I’ll vote for Hillary in November.

In an interview with MPR in 208, Bill Moyers predicted that, “the realities of power will cause Obama to make choices that will disappoint a lot of people.” Moyers was right. That’s kind of an easy prediction. Politics produces no perfect presidents. Even if it did, a perfect president could do little without Congress and governors and state legislatures and city councils.

And us. Because we the people, in the streets and in the voting booths, chanting protests or writing to our representatives, must continue to work for justice.