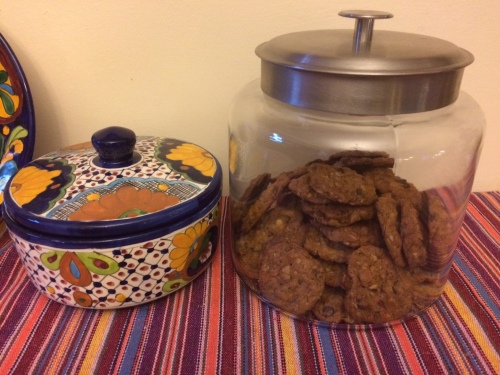 Tonight I’ll watch Hillary Clinton accept the Democratic nomination for president. And while I watch, I’ll celebrate with some cookies, the Hillary chocolate chip cookies I baked this afternoon. I’ve been baking those cookies since 1992. They were (and are) my family’s favorites among all my cookie recipes. Hillary’s chocolate chip cookies went to school with my daughters, to the envy of their classmates. Sometimes they asked me to pack extra cookies for sharing. I mailed the cookies in care packages to college dorms. These cookies have gone to parties and potlucks and staff meetings. I’ve dropped off boxes of the cookies for telephone callers in the 2012 “Vote No” campaign for equal marriage rights and at the #JusticeforPhilando occupation this year. I’ll probably keep baking them forever.

Back in 1992, when Bill Clinton was running for president, Hillary was attacked time after time for having a career of her own. At one point, she responded, “I suppose I could have stayed home and baked cookies and had teas, but what I decided to do was fulfill my profession, which I entered before my husband was in public life.” What happened next, the Boston Globe recalled in 2013, was predictable:

“She got slammed. The cookie-baking reference was seized upon as evidence not just that Hillary wasn’t a stay-at-home mom, but that she had contempt for women who had made this choice. (What she really had contempt for was the assumption that, for a politician’s wife, this was the only choice.)

“The press and the public chose to misunderstand her, and they made her atone. ‘Family Circle’ magazine ran a contest pitting Hillary Clinton’s cookie recipe against Barbara Bush’s.”

Yes. A cookie-baking contest. The magazine has continued the contest every four years since then — because obviously, what Americans really want from a First Lady is cookies, not thoughtful discussion of issues.

Tonight, however, Hillary’s policies take center stage, as they should, whether you or I agree or disagree with the content of those policies.

And I’m going to watch every minute of her speech, because  it’s about damn time that a woman’s politics matter more than her recipes.