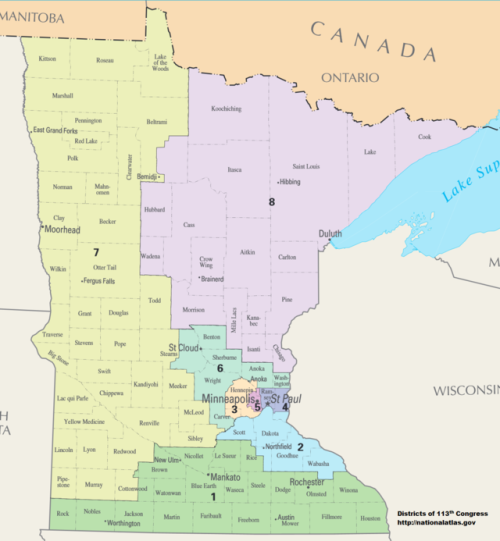 Down-ballot races make a huge difference in post-election life, which is to say, in all of our lives, every day of every year. These are the people who make the laws (U.S. and state legislators), who preside over the justice system (district, appellate and supreme court judges), and who run the schools. Down-ballot voting this year also includes referendums on a Minnesota constitutional amendment and on a Minneapolis school tax levy.

Nationally, down-ballot races will determine what kind of Congress we have for the next two years. Will we have a Senate that goes along with Senator John McCain’s threat to vote down every single Supreme Court nominee from Hillary Clinton, regardless of who they are or whether they are qualified? Will we have a continuing Republican majority in the House of Representatives that stops every progressive piece of legislation and spends all its time on repetitive and unproductive “investigative” hearings? Or will we have a Congress that actually cares about governing the country?

According to FiveThirtyEight, Democrats have a good chance of winning control of the Senate, where Republicans currently hold 54 of 100 seats. FiveThirtyEight isn’t making predictions on the outcome in the House of Representatives, where Republicans currently have 247 of 435 seats. In my opinion, this is a year when anything could happen – even Democrats taking back control of both houses – though I’m not making any predictions or bets.

In Minnesota, neither U.S. Senate seat is on the ballot this year. Three of Minnesota’s seven House seats could be in play. In the Second District of southern and western suburbs, Republican John Kline is retiring, and there’s a major slugfest between DFL-endorsed Angie Craig and Republican Jason Lewis. Lewis is a decidedly nasty former shock jock – this is one Republican district that could flip to the DFL column this year.

In the Third District, mostly western suburbs, Republican incumbent Erik Paulsen is running against DFLer Terri Bonoff. Paulsen is now trying to distance himself from Trump, but it’s not clear whether that will help or hurt him with his party’s base. He’s had four terms in Congress, but Teri Bonoff, who represents a significant part of the district in the Minnesota Senate, is a strong candidate.

In the Eighth District, which covers about the northeast third of the state, including Duluth and the Iron Range, DFL incumbent Rick Nolan is facing a second challenge by Republican Stewart Mills. Nolan beat Mills two years ago and seems the likely winner this time, but in an anything-can-happen year, he’s running hard. And Mills is running some of the nastiest advertising I’ve seen anywhere.

Then there are the Minnesota legislative races. All 67 Minnesota Senate seats and all 134 seats in the House of Representatives are on the ballot this fall. The DFL holds a 38-seat majority in the Senate now, while Republicans have a 73-seat majority in the House. That has led to gridlock, time after time. I’m not going to try a race-by-race analysis of all of the Minnesota legislative districts, but I recommend Sally Jo Sorenson over at Bluestem Prairie and Naomi Kritzer at Will Write Tell Stories for Food. (If you have any recommendations, please add them in the comments.)

One response to “Voting down-ballot in Minnesota”