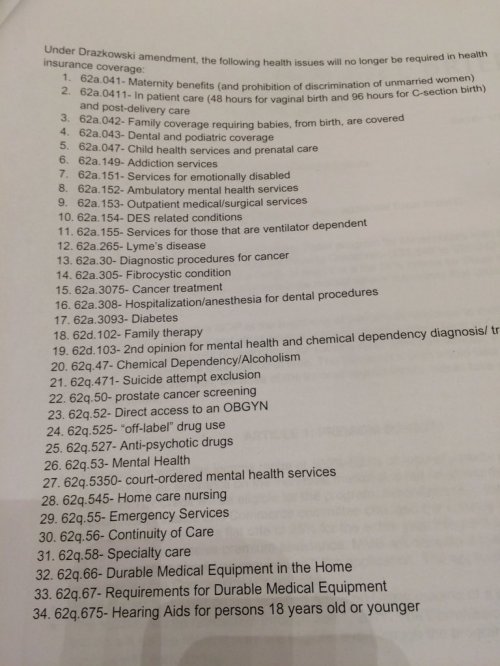 All these conditions could be excluded from health insurance coverage under Republican legislation.

Minnesota Republicans want to free health insurance companies from providing any benefits: “Notwithstanding any state or federal law to the contrary, a health plan company may offer health plans that do not include federally required health benefit mandates.” As I read it, this would allow insurance companies to refuse to pay for vaccinations or valve replacements, for contraceptives or cancer treatment. Insurance companies would be free to pick and choose what they cover and what they exclude – and who they cover, and who they exclude for pre-existing conditions or any other reason. That’s in the bill passed by the Minnesota House of Representatives on January 19.

The House Republicans put this provision in the bill that is supposed to provide health insurance premium relief for Minnesotans. Besides giving the insurance companies this and several other gifts, Republican legislators devised a complicated plan that will delay any premium relief for at least nine months.

Republicans don’t like the DFL plan, which would begin delivering premium relief immediately, because it’s too simple, and because it might give premium relief to rich Minnesotans. The DFL plan calls for insurance companies to charge all the individual insurance buyers 25 percent less and to bill the state for that 25 percent. That would deliver instant, automatic premium relief.

Both House and Senate Republicans propose a complicated state administrative system of income verification and graduated tax credits. That would ensure that richer Minnesotans get less benefits, a rather unusual Republican goal. However, the administrative cost of the Republican system would be at least as much as the money saved by giving less premium relief to higher-income Minnesotans. That’s right – the Republican plan would cost just as much as the DFL plan, but would pay more money for bureaucracy and less money for premium relief.

The Minnesota House and Senate bills go to conference committee this week. The Senate bill, while it includes other goodies for insurance companies, does not include ending all benefit mandates. I suspect the House provision is not even legal: I don’t think the Minnesota legislature can override federal health insurance laws.

The Republicans have a majority in both House and Senate, so they can decide what to pass with zero consideration of DFL input. That will leave Governor Dayton with a dilemma: whether signing a bad premium relief bill is better than vetoing it and hoping that the Republicans will be more reasonable on the next try.