To my Republican friends and family: This is personal 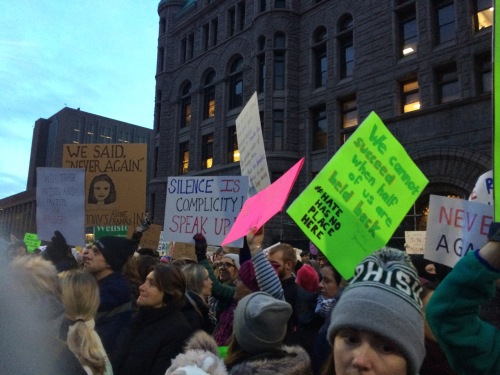 Any threats, any racist actions are outrageous. Any racist, anti-Muslim, anti-Semitic, anti-immigrant bigotry betrays our country’s ideals. Today’s bomb threat at our JCC hit close to home, but it is not the only time that racism and bigotry have hit close to home in the past two months.

The nine-year-old grandson of friends was called racist names in his Minneapolis public school. This is not normal.

Immigrant children in our schools have been insulted and harassed. This is not normal.

Swastikas and Nazi slogans have been smeared across the University of Minnesota campus. This is not normal.

“In a Facebook post on Friday, Idan Cohen, a fellow at the U of M’s Hillel campus organization, publicized the signs, which function as advertisements for the white supremacist website Daily Stormer. Cohen calls these signs the ninth Nazi or anti-Semitic incident on the Twin Cities campus since December.”

A group of Bosnian Muslim immigrants who bought land in Chisago County for a cemetery were denied a permit. This is not normal. From the January 23 Star Tribune article:

“People of all religions have helped my family,” Gluhic said. “I have never felt the hatred and animosity that I do now and I’ve been here for 23 years. After being welcomed for so many years, it’s tough to see that now.”

To any of my Republican family and friends who do not understand why this year and this president and this administration cause fear, consider this: in 30 years, I have not seen bomb threats against Jewish Community Centers in Minnesota.

Over the course of my lifetime, I have seen racism and bigotry become steadily less respectable, less public, less acceptable, less normal in this country.

Racism and bigotry have always been a part of this country, a part that needs to be fought against. Now I see racism and bigotry are expressed more forcefully, more often, more viciously than in the past thirty or forty years.

I take this personally. Every hateful anti-black, anti-gay, anti-Muslim, anti-Jewish comment threatens my children, my cousins, my uncle, my family, my friends, my neighbors. Yes, this is personal to me. I want you to take it personally, too. I want you to speak up and take action to stop the hate.

2 responses to “To my Republican friends and family: This is personal”