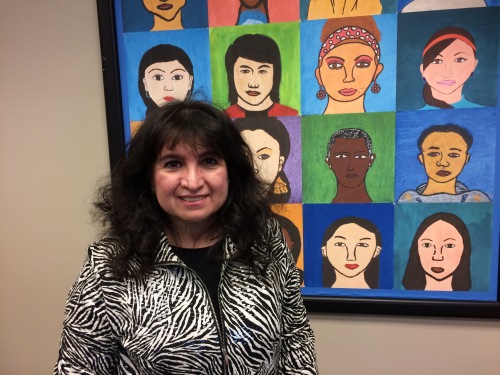 “A cow will drink calf’s milk.” What does this proverb mean? On a sunny winter afternoon, eleven students from six different countries share proverbs from their own countries. They say the proverb first in the original language, then translate, and finally explain the meaning. The cow drinking calf’s milk? “When they get older, parents must depend on their children.”

The students discussing proverbs are among 272 students from 20 different countries enrolled at LEAP High School, a St. Paul public school that welcomes new immigrants who are 15-20 years old. They study a regular high school curriculum, in all-English-language classes, trying hard to cram 12 years of education into four or five or six.

This article was originally published in Minnesota Women’s Press.

The new presidential administration’s anti-immigrant stance has hit some students hard. Some at LEAP have felt fearful and confused. Some teachers have cried. Meetings have helped. So did a St. Paul school board resolution affirming support for all of the districts’ immigrant students.

But fear remains. “If I am required to look for my students and turn them in, I will resign,” says LEAP High School Principal Rose Santos. “I cannot ethically do that. I hope it doesn’t get to that point.”

St. Paul Public Schools educate students from families that speak more than 100 different languages. About one student in three learns English as a second – or third or fourth – language.

Statewide, about 428,000 Minnesotans were born in a country other than the United States. According to the state demographer’s office, the largest group of immigrants in Minnesota comes from Mexico, followed by India, Laos, Somalia, Ethiopia, China, Thailand and Vietnam. Hmong immigrants come from both Laos and Thailand. Nearly half of those immigrant Minnesotans have already become naturalized U.S. citizens.

Lah Lah was born in Burma and grew up in a refugee camp in Thailand. “We moved to refugee camp because there is a war and my family can’t stay any more,” she says. “All our house was burned.”

In the refugee camp, she studied English, “only writing, not speaking.” Lah Lah and her mother, grandmother and younger brother finally got permission to come to the United States in 2012. Since they could not speak English, she used cards with pictures to show to people on the long airplane journey to tell them when she needed something, like a drink of water.

Now 20 years old and a student at LEAP High School, Lah Lah says she has friends from Nepal, Mexico, Guatemala, Kenya, Burma, Malaysia and other countries. “I feel like we are family,” she says. “We are the refugees. We have the same kind of background. We don’t have any peace in our country so we have to run from there. All of us want to be educated.”

Lah Lah is on track to graduate from LEAP High School in June. Some 85 percent of LEAP graduates go on to college. LEAP graduates include nurses, medical technicians, social workers and teachers.

Many LEAP students age out before they can graduate. “Time is not on our side or the students’ side,” Santos says. “They have to learn 12 years of education before they turn 21 years of age in order to get the diploma.”

When students must leave before graduating, LEAP’s counselor works to get them into Roseville high school, where they can earn a diploma, or into the Hubbs Center or the Guadalupe Area Project, which offer adult education programs. Most LEAP students want a diploma, not a GED, Santos says.

When Santos came to LEAP 12 years ago, Somali students comprised the largest group. Later, an influx of Hmong students came when the refugees at Wat Tham Krabok were resettled. Today, Karen refugees from Burma make up the largest group of students, with Spanish speakers second, including recent refugees from El Salvador. Students in the school speak 20 different languages.

Santos says that about 60 percent of LEAP students have never gone to school before, so they need to learn how to read and how to study, in addition to learning a new language and the regular high school curriculum. While all LEAP classes are taught in English, students are grouped by language ability level.

Young immigrant women face special challenges. “The male students have always been expected to go to school,” Santos says. “It’s a new phenomenon for the female students to go to school. They love it. They take every advantage of it.” The Girls Getting Ahead in Leadership (G-GAL) program, specially designed for the young immigrant women, emphasizes leadership skills, exploring college options and homework help.

Lah Lah plans to go on to college, first at Century College and then at Metro State, so that she can become a registered nurse. She wants to help people – here and in Karen refugee camps, and in Kenya and Mexico. She also plans to become a U.S. citizen. When she came to LEAP, she says, “I felt like belonging to the United States.”