John Lewis: Making a Way Out of No Way 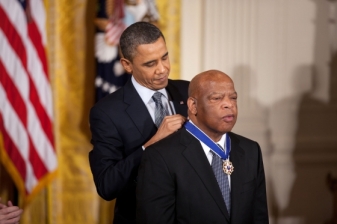 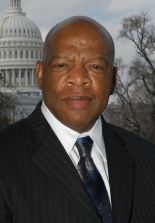 From the time he was a little boy preaching to chickens through his life-long fight for justice for all to these last years as a strong voice in opposition to the travesty of the Trump administration, John Lewis held fast to his ideals of truth and justice for all. The best way I can think of to mourn and mark his death and to honor his life is to lift up his words.

In 1963, he gave a speech at the March on Washington. It was a strong speech but not as strong as he wanted. The leaders of that march made the young John Lewis tone down the fiery rhetoric of his original text. Here are a few excerpts from the original version of that 1963 speech, as true today as they were 57 years ago:

“The revolution is at hand, and we must free ourselves of the chains of political and economic slavery. The nonviolent revolution is saying, ‘We will not wait for the courts to act, for we have been waiting for hundreds of years. We will not wait for the President, the Justice Department, nor Congress, but we will take matters into our own hands and create a source of power, outside of any national structure, that could and would assure us a victory.’

“To those who have said, ‘Be patient and wait,’ we must say that ‘patience’ is a dirty and nasty word. We cannot be patient, we do not want to be free gradually. We want our freedom, and we want it now. We cannot depend on any political party, for both the Democrats and the Republicans have betrayed the basic principles of the Declaration of Independence.

“We all recognize the fact that if any radical social, political and economic changes are to take place in our society, the people, the masses, must bring them about. In the struggle, we must seek more than civil rights; we must work for the community of love, peace and true brotherhood. Our minds, souls and hearts cannot rest until freedom and justice exist for all people.”

After that speech, John Lewis kept on marching and speaking out for justice. In 1965 on Bloody Sunday in Selma, police beat him down and fractured his skull, but they could not stop him. On Twitter in 2013, he quoted Dr. Martin Luther King: “There is no sound more powerful than the marching feet of a determined people.”

His feet and voice remained powerful over the decades, whether marching in Selma or speaking in Congress. In 2016, he led a sit-in following the Pulse nightclub shooting. That sit-in took place in Congress, as Lewis and others demanded a vote on legislation to address gun violence.

In December 2019, John Lewis was diagnosed with pancreatic cancer. Neither the cancer nor the diagnosis stopped him. Speaking on the floor of the House, he urged his colleagues to vote for the impeachment of Donald Trump:

“Our nation is founded on the principle that we do not have kings. We have Presidents. And the Constitution is our compass. When you see something that is not right, not just, not fair, you have a moral obligation to say something. To do something. Our children and their children will ask us, ‘What did you do? What did you say?’ For some, this vote may be hard. But we have a mission and a mandate to be on the right side of history.”

In today’s political maelstrom of corruption and lies, I hold on to a 2018 John Lewis tweet:

“Do not get lost in a sea of despair. Do not become bitter or hostile. Be hopeful, be optimistic. Never, ever be afraid to make some noise and get in good trouble, necessary trouble. We will find a way to make a way out of no way.”

One response to “John Lewis: Making a Way Out of No Way”