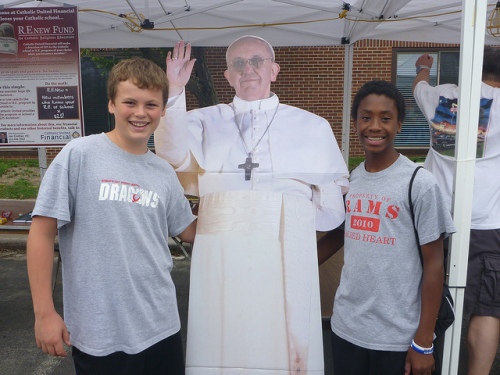 Is Pope Francis a breath of fresh air, throwing Vatican windows wide open to the world again, heralding a new day for the Catholic Church? Or is he a cafeteria progressive, choosing only certain social issues — environment, refugees, the poor — and maintaining a hard line on others —acceptance of LGBT people, role of women, anything to do with sexuality?

I left the church over Pope Benedict XVI — Joseph Ratzinger’s anti-gay and anti-woman rhetoric. Pew Research says that puts me in a not-very-select group: just over half of all adults who were raised Catholic have left the church at some point. Some return, most don’t, but “American Catholics – both in and out of the church – are still like a family, just one where not everyone is living under the same roof.”

“In the present condition of global society where injustices abound and growing numbers of people are deprived of basic human rights and considered expendable, the principle of the common good immediately becomes logically and inevitable a summons to solidarity and to a preferential option for the poorest of our brothers and sisters.” (Laudato si, 158)

During the 1980s, Dominican priest and theologian Matthew Fox espoused a creation-centered theology that looked at the beauty and goodness of creation, including human beings. He focused on original blessing rather than original sin. Fox was expelled from the church in the 1990s by then-Cardinal Joseph Ratzinger, who condemned Fox’s creation-centered spirituality.

Pope Francis takes a different stance. In Laudato si, Pope Francis writes that, “Rather than a problem to be solved, the world is a joyful mystery to be contemplated with gladness and praise.” Later in the encyclical, he writes:

“In the first creation account in the Book of Genesis, God’s plan includes creating humanity. After the creation of man and woman, “God saw everything that he had made, and behold it was very good” (Gen 1:31). The Bible teaches that every man and woman is created out of love and made in God’s image and likeness (cf. Gen 1:26).” (Laudato si, 65)

Positive as this rhetoric is, Pope Francis hasn’t turned the church around. Maybe it’s like an ocean liner, too big to turn quickly. Or maybe the change is primarily rhetorical — like George Bush’s “kinder, gentler nation.”

Pope Benedict/Ratzinger condemned homosexual acts as “an intrinsic moral evil” and homosexuality as “an objective disorder.” Pope Francis sounded a kinder, gentler note, saying, “If someone is gay, who searches for the Lord and has goodwill, who am I to judge?” While U.S. conservatives pitched a hissy-fit over the inclusion of prominent gay guests among the 15,000 people at the White House reception for Pope Francis, the pope himself doesn’t seem to mind.

And yet — he has not indicated any change at all in church doctrine that homosexual acts are sinful, nor has he come anywhere near acknowledging same-sex marriage and families.

Thank God for a pope who recognizes the reality of global warming, calls for environmental protection, and advocates for the poor. But we are still waiting for a pope who will celebrate all God’s children — even those of us who are women, gay, lesbian, bisexual, transgendered, intersex, and queer.

3 responses to “Pope-check: Where does Pope Francis really stand?”