Minnesota added 9,800 jobs in July, and the unemployment rate held steady at 6.8 percent, compared to a national unemployment rate of 9.5 percent. The increase in jobs is particularly significant, given that government employment in Minnesota dropped by 9,100, including 1,400 temporary census jobs. END_OF_DOCUMENT_TOKEN_TO_BE_REPLACED

This is the weekend edition of News Day, unless something incredibly big or irresistibly crazy (think Emmer’s $100,000 waiter gaffe) surfaces before Monday. I’ll be working on my garden, and on some articles about the status of women and girls in Minnesota – watch for them next week. So – keep reading for the latest on arsenic dumping in Minneapolis, one more way rich people are different from the rest of us, anti-immigrant graffiti in St. Cloud, the Oakland police non-murder verdict, and more. END_OF_DOCUMENT_TOKEN_TO_BE_REPLACED

Pakistan Two bombs, remotely controlled and coordinated to detonate at the same time, killed at least 49 people and wounded at least 100 more in a market in the eastern town of Lahore on Monday. Most of the victims were women and children. END_OF_DOCUMENT_TOKEN_TO_BE_REPLACED

END_OF_DOCUMENT_TOKEN_TO_BE_REPLACED

In addition, the Minnetonka-based insurer urged employees to write letters to local newspapers and then share those letters with the company’s lobbying arm.

END_OF_DOCUMENT_TOKEN_TO_BE_REPLACED

Pawlenty’s prescription for the poor After decreeing an end to General Assistance Medical Care, the state program that covers the poorest of the poor, Governor Tim Pawlenty now has found a “solution.” He has ordered that the counties enroll GAMC enrollees in MinnesotaCare and pay their MinnesotaCare premiums for up to six months. After that, the former GAMC enrollees will have to pay their own premiums, estimated at about $5 per month, as well as any co-pays.

That could still be a problem. Many of those who are receiving General Assistance Medical Care (GAMC) are living on $203 a month, and are homeless, in precarious housing, or low-income housing. An estimated 70 percent of those who receive GAMC deal with a mental illness or substance abuse.

Hospital officials told the Star Tribune that many GAMC enrollees incur inpatient costs higher than MinnesotaCare’s $10,000 annual cap, and that people who arrive at the emergency room in need, but not yet enrolled, will not be covered. Under GAMC, if an eligible person arrives at the hospital in need of emergency treatment, the person can be retroactively enrolled to cover the cost of treatment.

Nor are the counties thrilled about picking up the premium tab. “It’s in counties’ interest to make sure this group of people has coverage, but we’re not happy about having an additional cost passed on to us,” said Patricia Coldwell, a policy analyst for the Association of Minnesota Counties.

Sen. Linda Berglin, DFL-Minneapolis, who chairs the Health and Human Services Budget Committee, said MinnesotaCare is already stretched because the economy has resulted in a surge of new enrollees. Add the General Assistance enrollees and the program is likely to run out of funding in 2011 instead of 2012, she said.

The janitors worked for San Francisco-based ABM, which cleans many downtown office towers in the Twin Cities. ABM, the Immigration Customs and Enforcement (ICE), and the janitors’ union, SEIU, all declined comment for the MPR article. The process began this summer, with ABM letters to workers saying ICE had found problems with their paperwork. They were given time to fix the problems, but time ran out in October, when the firings started. ABM had advertised for workers in September and apparently filled all of the positions before firing workers.

The Obama administration has been aggressive in removing undocumented workers. In fiscal year 2009, which ended in September, ICE deported 6,300 people from the region represented by Minnesota, the Dakotas, Iowa and Nebraska. That’s 1,000 more people than during the last year of the Bush administration. …
John Keller of the Immigrant Law Center says of the 1,200 fired janitors, about 10 might have a path to citizenship under existing laws. The rest, he says, will probably try to wait it out, hoping for the laws to change so they can work here legally.

Strib cuts 100 The Star Tribune will cut 100 jobs, including 30 in its 290-person news room, it announced yesterday. The 70 non-news-room jobs will be gone by the end of the year, while the 30 news room jobs “may take a little longer.”

The pink slips started coming Monday. Duane Lee, a project coordinator in the facilities department, said he was told his job would be eliminated Dec. 31 and that he was part of the 100 layoffs. The company gave him an employee-of-the-year award in 2004, Lee said.
Since 2006 the Star Tribune has shrunk its workforce by nearly 40 percent, or the equivalent of 779 full-time employees.

At MinnPost, David Brauer interprets talk about “somehow restructuring how work is done:”

To me, that’s code that the cuts will focus on non-bylined newsroom troops such as copy editors, designers, etc. The Strib has held reporters relatively harmless in recent cutting, and I’m betting that will continue.

“Reports that President Obama has made a decision about Afghanistan are absolutely false. He has not received final options for his consideration, he has not reviewed those options with his national security team, and he has not made any decisions about resources. Any reports to the contrary are completely untrue and come from uninformed sources.”

President Obama embarks on a week-long trip to Asia on Thursday and no decision is expected until after the trip, according to TPM.

Pakistan A bomb outside a market in northwest Pakistan today killed at least 20 people and wounded more than 50, some critically, according to AP.

The bombing in Charsadda city was the third attack in as many days in or close to Peshawar, the capital of Pakistan’s North West Frontier Province. Militants have stepped up attacks in recent weeks in retaliation for an army offensive in a key area along the Afghan border. 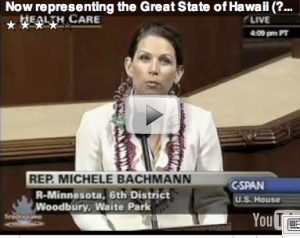 Election day tomorrow For Minneapolis voters, it will be a first experience with the new Ranked Choice Voting system, which is part of the reason for a plethora of candidates from across the political spectrum — and beyond. (That’s especially true in the mayor’s race, which includes the Edgertonite (“Laura Ingalls Wilder is God”) and “Is Awesome” candidates.) END_OF_DOCUMENT_TOKEN_TO_BE_REPLACED

We’re number one! Forbes magazine has just named the Twin Cities the safest place to live, and Twin Cities home price increases lead the nation, with 3.2 percent in August, on top of 4.6 percent from June to July. Of course, when you look at the numbers a little more closely, you find that foreclosure rates are also higher than the rest of the nation, and that home prices are still one-third below 2006 levels, but why let the numbers get in the way of a good headline?

The Star Tribune reports that rising home prices in the Twin Cities lead the nation, though prices remain 13.7 percent below August 2008 levels. One of the factors bolstering the housing market is the federal first-time-home-buyer tax credit, which has pushed homes sales throughout the summer, but is set to expire at the end of November. The Strib reports: “The median price [for Twin Cities homes] peaked in September 2006 at $229,000 and bottomed in April at $153,000.” August’s median home price was $175,000.

Foreclosure rates are rising right along with home prices:

But at least Forbes loves us, gushing:

Minneapolis tops our list of America’s safest cities, and not just for its crime rate. In ranking the cities on our list, we looked at workplace fatalities, traffic-related deaths and natural disaster risk; the City of Lakes ranked in the top 10 of all four categories. It’s also one of America’s best places to live cheaply and offers easy access to some of the most scenic drives in the country.

And what about St. Paul? We’re just lumped in as part of the “Minneapolis-St. Paul-Bloomington, MN-WI” metropolitan area.

Minneapolis pays again This time the city is paying $100,000 for bad policing, a settlement for police misconduct caught on a Hennepin County Safe Zone video camera, reports the Star Tribune. The lawsuit alleged false arrest and discrimination, and the video showed that police officers’ descriptions of what happened were just about 180 degrees from the truth. See the video on the Strib website. One of the officers is already under investigation for his actions as part of the Metro Gang Strike Force, but police spokesperson Jesse Garcia said he wasn’t aware of any internal investigation or discipline based on the north Minneapolis traffice stop resulting in the settlement.

Judge Robert Blaeser had earlier dismissed criminal charges filed against the couple in the case, after viewing the tape and reviewing the police reports:

“One officer says the car was silver; one says it was gold,” Blaeser said. “One says it ran a red light; one doesn’t say anything about that. One says he saw somebody throw something out the driver’s door; the other one did not. One says the passenger was jumping on the back of an officer, pulling the officer, and that he maced her; and the other one does not. I’m going to find that there’s not enough credible evidence for a stop in this case.”

Bostrom vs. Fletcher Assistant St. Paul police chief Matt Bostrom formed a Bostrom for Sheriff committee, which means he probably will run against incumbent Sheriff Bob Fletcher in next year’s election, according to the Star Tribune.

Bostrom helped oversee RNC security plannning, and drew criticism from Fletcher during that time, recalls the Minnesota Independent, with Fletcher “repeatedly warning that the St. Paul department had failed to recruit enough police officers to ensure that it went off without serious problems.” Fletcher’s RNC conduct is certain to be an issue in the campaign, but it’s not the only one:

The four-term incumbent’s also been at the center of an investigation into the activities of the beleaguered — and now disbanded — Metro Gang Strike Force. Two damning reports released earlier this year alleged that the law enforcement agency routinely seized money from citizens without justification, failed to adequately keep track of its assets and displayed a general disregard for the civil rights of citizens, particularly minorities. The Ramsey County Sheriff’s Department was the fiscal agent for the gang strike force.

Pakistan Nearly 100 people are already reported killed in a market bombing in Peshawar, reports NPR, as Secretary of State Hilary Clinton arrived in Islamabad for a three-day visit. According to the Washington Post:

The bombing early Wednesday in a crowded market in Peshawar — about three hour’s drive from the capital — was the deadliest attack in Pakistan this year, and the latest in a wave of suicide bombings, assassinations and attacks staged in response to a major Pakistani offensive against insurgent sanctuaries near the Afghanistan border.

Afghanistan Eight more U.S. troop deaths in two attacks Tuesday brought the total U.S. troop toll to 55 for October, the highest number in any month since the war began, according to AP. All the deaths were in Kandahar province, and other troops were wounded in the fighting.

The military issued a statement saying the deaths occurred during “multiple, complex” bomb strikes. It said several troops were wounded and evacuated to a nearby medical facility, but gave no other details.

In addition to military deaths, three U.S. DEA agents were killed, along with soldiers, in a helicopter crash on Monday, and the bodies of three civilian crew members were recovered from the wreckage of a U.S. army plane that crashed in western Afghanistan two weeks ago. According to BBC, the three were also U.S. nationals.

Also on Wednesday, reports AP, the Taliban attacked both a U.N. guesthouse and a luxury hotel in the capital city of Kabul:

Gunmen with automatic weapons and suicide vests stormed a guest house used by U.N. staff in the heart of the Afghan capital early Wednesday, killing 12 people – including six U.N. staff – officials said. The U.S. Embassy said one of the U.N. dead was American. A Taliban spokesman claimed responsibility, saying it was meant as an assault on the upcoming presidential election.